Sheriff's Departments from five counties are teaming up for the First Annual South Central Kentucky Sheriff's IGY6 (I Got Your 6) Charity Motorcycle Ride, this Saturday.

To pre-register, or for more information, contact any of the Sheriff's Departments in Adair, Casey, Clinton, Cumberland, or Russell Counties.

KY 698 in Lincoln County to be Temporarily Closed Tomorrow

Closure is for railroad crossing maintenance

Crews will close the route at approximately 8 a.m. ET and will re-open by approximately 3 p.m. ET.  The date and duration may be adjusted.

A signed detour route will be posted during the closure.

Motorists can access travel and traffic conditions at http://goky.ky.gov or contribute their own reports at www.waze.com or via the Waze mobile application.

The Mayor of Somerset is honored with a prestigious award.
Jeff Henderson has the story...

Temperatures in the 90s and dew points in the 70s will push heat index values over 100 degrees in many areas. The heat index could approach 105 in southwest Indiana and the urban areas around Louisville.

Take extra precautions to prevent heat stress if you work outside or engage in strenuous outdoor activities. Drink plenty of fluids and take breaks in the shade or air conditioning.

Never leave children or pets unattended in a parked vehicle.

SOMERSET, Ky. (Aug. 24, 2021) – Work is progressing on the KY 80/Ringgold Road pavement project. Crews reopened the north side of Ringgold Road (KY 3263) earlier today and have moved the closure to south Ringgold Road.

Ringgold Road south is now temporarily closed to through traffic between the KY 80 intersection (mile point 3.5) and Sunset Drive.

This closure is expected to last four weeks.

KYTC asks motorists to be aware of the work zone, expect delays, and to utilize safe driving habits when traveling through the area.

The duration of the closure may be adjusted for inclement weather or other unforeseeable delays.

Motorists can access travel and traffic conditions at http://goky.ky.gov or contribute their own reports at www.waze.com or via the Waze mobile application. 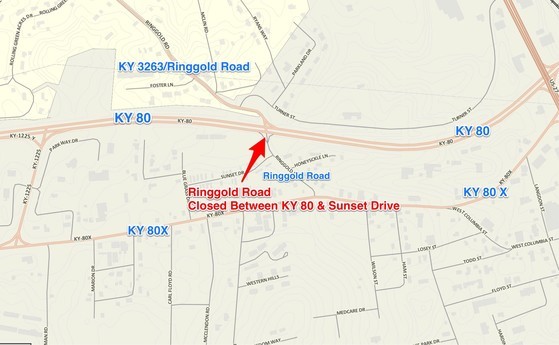 The Russell County Honor Guard is hoping you will join with them in celebrating and honoring the American Flag with a special Flag March this Saturday in Russell Springs.

Frank Irvin is one of the organizers for this event...

A Somerset man was arrested on drug & burglary charges in Russell County.

Russell Springs Police Chief Tim Pierce, says Officer Kyle Wilson responded to the call of a break-in at Cumberland Lodge. 33 year old Mark P. Bonham, of Somerset, admitted to breaking into the room, which was not rented at the time. There were numerous back packs in the room, believed to be abandoned property. After further investigation, Officer Wilson found a firearm, a large quantity of cash, and suspected methamphetamine.

As we approach the anniversary of the 9/11 attacks on America, Glen Phillips, Commander of the Casey County VFW Post #5704 in Liberty, reminds us to show some extra patriotism during this time...

The public is invited to a fundraiser event Saturday at the Pork Producer's Building. There will be a Motorcycle Ride, followed by live music, a meal, and auction.

Sarah Publow says, the ride will happen rain or shine...

We remind our listeners, an indictment is only a legal accusation, not an indicator of guilt.

Kim Cain presented the court with the district tax rates for the health department...

All those rates were approved.

Judge Dial presented the magistrates with a first reading of a budget amendment to include some federal grant money...

Deborah Vaughn was reappointed as treasurer. Melissa Richards was removed as acting treasurer and re-appointed as deputy judge executive.

Judge Dial told the magistrates, active Covid numbers are on the rise...

The next regular meeting date for the fiscal Court is Labor Day, so barring any special meetings, the next regular scheduled meeting will be the 3rd Monday in September.

A Russell County man has pled guilty to murder.

35 year old Jason W. Clark, of Jamestown, was charged with killing Brandy Johnson at Coe’s Steakhouse in 2018. He plead guilty Monday in Russell Circuit Court to charges of Murder and Tampering with Physical Evidence.

The Commonwealth is recommending a sentence of 25 years in prison.

Sen. Rand Paul stopped by Russell Co. Hospital last week to talk about some issues with the hospital, and address some questions from the board & staff.

Jeff Henderson has the story...

Two people were arrested Wednesday, following a traffic stop on US 27 in Somerset.

Deputy Hudson, with Pulaski Co. Sheriff's Office, stopped a 2019 Nissan Altima. Discovered inside the vehicle were approximately 85 grams of methamphetamine along with digital scales, and multiple needles.

Both men were lodged in the Pulaski County Jail.

Jeff Henderson reports on the latest meeting of the Pulaski County Fiscal Court...

Deputies responded to the scene just before 11am Sunday, when they noticed that a passenger, 33-year-old Daniel Brosnan of Somerset, seemed to be under the influence. Further information led deputies to finding a backpack that Brosnan had attempted to throw away.

Inside the backpack, officers found over 132 grams of methamphetamine, and nearly 25 grams of cocaine, along with a needle and digital scales.

Deputies say the driver, 39-year-old Mary Gaines of Ferguson, also seemed to be under the influence. She had an active arrest warrant in Russell County. A loaded handgun was found in the glove compartment. Gaines also had $170 in her purse and a set of digital scales.

Gaines was charged with DUI, driving on a suspended license, trafficking meth & cocaine, possession of a handgun by a convicted felon, and possession of drug paraphernalia. She was also cited for promoting contraband when deputies found Lortab on her at the Pulaski Co. Jail.

Brosnan was charged with public intoxication, trafficking meth & cocaine, possession of a handgun by a convicted felon, and possession of drug paraphernalia. He was also lodged in the Pulaski County Jail.

The Casey County Board of Education met in regular session last night.
It was the first regular meeting with new Superintendent Barry Lee at the helm...

The Board's next regular meeting is scheduled for Sept. 11th, however, a special hearing was tentatively scheduled for Thurs., Sept. 2nd to set the district's Tax Rate, which remained unchanged from last year.

Mayor Steven Brown reported that the City has received an Agreed Order from the Division of Water for a reduced Water Penalty...

Mayor Brown says, this is a one-time only reduction, to give Liberty the chance to take action. He said Sewer Plant numbers are improving...

More good news, the Department of Local Government has approved a Grant request for studies by the Corps of Engineers to help reduce flooding...

There was some discussion about flood mitigation & perhaps talking with the County about moving Gateway Park.

Councilman Andy Lawhorn brought up the need for an Occupational Tax for the City...

No action was taken.

The next regular meeting of the Liberty City Council is scheduled for Sept. 13.

A Wyoming man was getting no where fast Sunday.

He was arrested shortly before 5pm when Casey County Sheriff Chad Weddle found him driving in circles in the parking lot at Dogwalk Market in Dunnville.

The subject, 45 year old Joseph F. Rauchwater, of Casper, Wyoming, had previously been running around in the parking lot with a large knife, causing a disturbance.

Mr. Rauchwater was lodged in the Casey County Jail.

Deputy Jayson Grider made the arrest.

A Monticello man was arrested on drug charges in Russell County late Wednesday.

Mr. Bratcher was lodged in the Russell Co. Jail.

A Danville man was arrested Wednesday morning after trying to out run deputies.

According to the citation, Deputy Jayson Grider with the Casey County Sherriff’s office was travelling West on 70, when he attempted to initiate a traffic stop on a 2004 Chevy Silverado, driven by 41-year-old Justin Cooper of Danville.

Sheriff Weddle was ran off the roadway by Cooper, who travelled into a hay field before wrecking. Cooper then jumped out of the driver window before being arrested.

A search of the vehicle revealed a glass pipe & suspected meth laying in the floor board.

He was lodged in the Casey County Jail.

District Court, under Judge Michael Loy for Tuesday August 3rd has been cancelled.

If you were scheduled to be in court Tuesday, please contact the Casey County Circuit Clerk’s Office at 787-6510 for your new court date.

Jeff Henderson reports on more fall-out from the last meeting of the Pulaski County Fiscal Court...

WKDO Air Staff
12:00am - 6:00am
Regular Programming
Make An E-Quest
My Profile