I hope you have had a great Friday so far. This will be my last blog for the week, I don't think I will be doing any weekend blogs unless something major changes with our forecast.

With that being said, I do have an update in regards to the Flash Flood Watch that is in effect until Saturday, Aug. 1st at 8 AM EDT from NWS:

**Waves of showers and thunderstorms are expected tonight. Repeated heavy rainfall may result in flash flooding, especially in areas that has already seen rain from yesterday. Motorists should be prepared for rapidly reduced visibilities in heavy rainfall, and ponding/flooding of water on road surfaces. Keep in mind that areas that have already experienced recent heavy rains will flood more quickly with additional heavy rain.

Basically, it looks like July will end with some wet weather and the beginning of August looks to follow. Let's take a look at your forecast:

Tonight - As stated above, rain and storms will continue tonight as we have a 60% chance. Tonights lows will be around the upper 60s into the low 70s.

Sat. / Sat. Night - Showers & storms are likely, highs will be around the mid to uppers 80s, and the lows will average around the upper 60s.

Sun. / Sun. Night - Rain chances decrease down to around 20%, we will see partly sunny skies and highs will hang around the low to mid 80s. Same thing for Sunday night in regards to rain chances, very slim, lows will be in the low to mid 60s.

Mon. / Mon. Night - We should see some partly to mostly sunny skies with a slight chance of showers, highs around the mid 80s. Lows will be around the mid 60s.

Tues. / Tues. Night - Rain chances look to increase to around 40% in the latter part of the afternoon, otherwise it will be mostly sunny with highs around the low to mid 80s, and lows around the low 60s.

Be sure if you have any outdoor weekend plans, to keep that umbrella handy.

Have a great rest of your Friday evening and have a great and safe weekend, I will be back with a new blog on Monday!

It looks like it will be a rainy end to the month of July & it looks like we will have a rainy beginning for the 1st of August tomorrow.

An update, the Flash Flood Watch that was supposed to expire this morning has been extended until tomorrow (Saturday) morning until 8 AM EDT.

Something I would like to talk about this morning, is the explanation of the chance of precipitation. It can be confusing and misunderstood by many so I just want to give you some clarification.

So for example, when you look at our forecast for today, it shows that we have a 40% chance of showers (mainly later on this afternoon) for most of our local area. So some may think, well it is going to rain 40% of the time this afternoon, which is a common thought. Here's what it actually means:

**This point probability of precipitation is predetermined and arrived at by the forecaster by multiplying two factors:

Forecaster certainty that precipitation will form or move into the area

(and then moving the decimal point two places to the left)

(1) If the forecaster was 80% certain that rain would develop but only expected to cover 50% of the forecast area, then the forecast would read "a 40% chance of rain" for any given location.

(2) If the forecaster expected a widespread area of precipitation with 100% coverage to approach, but they were only 40% certain that it would reach the forecast area, this would, also, result in a "40% chance of rain" at any given location in the forecast area.

I know this blog was rather lengthy and definitely more informative than my previous ones, but hopefully you have a better understanding of how "chance of precipitation / probability of precipiation" is calculated and what it means.

I'll post another update later on this afternoon with a look at the forecase to kick off the month of August! hope you enjoyed this one & I will catch you back later!

Since my blog post earlier, the NWS has issued a Flash Flood Watch to be in effect until Friday morning. See below for all the details:

A low pressure system has brough widespread rain showers to the Lower Ohio Valley this morning, and as a semi-stationary front sets up near the Ohio River, additional storms and showers are expected to move along the front. This will likely result in training of showers and thunderstorms over the same areas. These areas will likely observe flooding conditions wih flash flooding possible due to the heavy rainfall rates expected.

A Flash Flood Watch means that conditions may develop that lead to flash flooding. Flash Flooding is a very dangerous situation.

You should monitor later forecasts and be prepared to take actions should flash flood warnings be issued.

As always we will have you up to date with the latest weather information here on 98.7 The Buck. Listen to us live online via our website, or via the Simple Radio app (its free!!). Also give us a like and follow on Facebook at Classic County 98.7 The Buck! 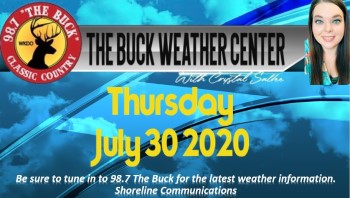 The greatest threat with these storms that do develop, will be very heavy rainfall. Some locations hat receive multiple rounds of very heavy rain could experience localized flash flooding. So we can't rule out seeing some Flood Advisories issued from the NWS.

Taking a somewhat quick glance into Friday through next week, we still have rain chances each day/night, ranging anywhere from a 30-70% chance. These would be more scattered. Widespread rainfall totals, as of today, looks to be forecasted totaling anywhere from 2-4" by the end of the weekend on Sunday. Again localized flooding could become an issue for areas that received repeated showers/storms.

Here are a few meanings in regards to flood watches/warnings/advisories, so you can differentiate between them: (Source: NWS)

-Flood Advisory - BE AWARE! - means river or stream flows are elevated, or ponding or water in urban or other areas is occuring or is imminent.

-Flood Watch - BE PREPARED! - issued when conditions are favorable for a specific hazardous weather event to occur, such as flooding. It does NOT mean flooding will occur, but that it is possible.

- Flash Flood Warning - TAKE ACTION! - issued when a flash flood is imminen or occuring. If you are in a flood prone area, immediately move to higher ground. A flash flood is a sudden violent flood ha can take from minutes to hours to develop. It is even possible to experience a flash flood in areas not immediately receiving rain.

Lets take a quick look at the forecast:

Keep an eye out, as I could possibly be posting another blog if we do start seeing the increased chance of localized flooding issues over the next day or so.

Again feel free to send me an email & let me know what you think or maybe what else you would like to see within these blogs. I appreciate every single one of you!

I hope you are having a great day & I'm glad you have joined me for my first official weather blog from The Buck Weather Center here on 98.7 The Buck! This is something new we are doing and I hope you will continue to join me on this journey as I help keep you informed with not only your latest weather updates, but also some informative and fun weather information.

So I'll keep this first blog pretty simple as I share a couple of definitions so you can better understand as well as going over a look at your forecast for the remainder of the week and into the weekend.

Let's take a look at the forecast:

Today/Tonight - For the rest of this afternoon into tonight, it looks as if we still have a chance of seeing some isolated showers and storms. The main threat with these storms will be cloud to ground lightning but keep in mind locally heavy rainfall cannot be ruled out. Today's high temps will top around 89-90 and tonights lows will be around the low 70s.

Thursday/Thursday Night - We will start off with some patchy morning fog and as the day goes on we will see some scatter showers and storms. Rain & storm chances will hang around 80-90% for our area. Thursday highs will be in the lower 80s and the lows will be in the upper 60s. Same story for Thursday night as we will continue to see the chance for showers & storms.

Friday/Friday Night - Rain & storm chances will continue to hang around with them being around 70-80%. Other than seeing that we will have mostly cloudy skies and highs will hang around the lower 80s. Friday night lows will be in the upper 60s, along with a 60% chance of more showers & storms for parts of the area.

Sunday/Sunday Night - It looks like we will end the weekend about like how we start it by having a 50% chance of showers and storms, other than that it will be partly sunny and highs will be in the low 80s. Sunday night rain chances decrease down to 30% and lows will be a bit cooler in the mid 60s.

Of course I will put my disclaimer, stating that the forecast is subject to change and when it does, I will do my best to update that here in my blog.

I hope this turns out to be a helpful, informative, & also a good thing! Be sure to let me know what you would like to see in my blogs by sending me an email at crystal@shorelinestations.com! I'd love to get your feedback!

Also if you don't already listen in, you can catch me on 98.7 every Monday - Friday from 1 PM to 6 PM for your afternoon ride!